Renovation shows get the manufacturers (or retailer) to pay for the furniture with promises of advertising exposure that will more than repay any costs incurred. It doesn’t really work out that way in real life.

ManCave came to us originally because they needed a very large sectional to fit down a very narrow staircase.

Simplicity Sofas specializes in Furniture for Small Spaces & Tight Places. For the first show we provided a fifteen seat sectional measuring 17 ft. x 17 ft. that could fit down a 24″ width staircase. 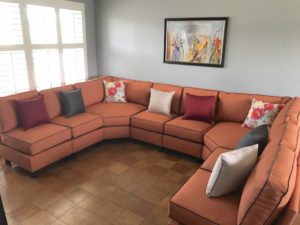 A Simplicity Sofas 8 seat armless sectional is shown in the photo.

It took more than a year for each show to air after the filming. The second show was taped before the first one aired.
In hindsight it was a big mistake to participate either time. Prior to the shows we were told that we would be donating the furniture in return for widespread public exposure on this popular TV show.

The second case was worse.

Then came the disaster.

In the 8 years since the shows aired I have not seen any evidence that a single customer (or anyone requesting a free catalog) ever saw us on ManCave.