Slats are the support pieces that run from side to side within the side rails of a bed frame.

These slats can be made from steel and incorporated into the bed frame itself. 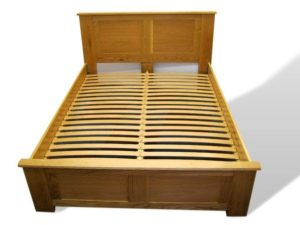 Photo of Beech Sprung Slatted Base by Riverwood Bedmakers

The term “slats”, when used separately from the rest of the bedframe, usually refers to removable wooden (or plastic) slats that run side to side between the side rails of a bed frame that is made of either metal or wood.

The outside bed frame rails are made with a flanged shelf that the slats can rest upon.

Bedframes have at least two long rails that run from the head to the foot of the bed.

The space separating these two pieces will vary depending on the width of the mattress that is used.

Depending on the number and width of the slats it is possible for a mattress to be placed directly over the slats without a separate foundation (or box spring.)